Even if you never knew his name, you knew him as a presence at ComFest. Babachu was in his element at ComFest. The sights and sounds and the total vibe of the mellow crowd inspired his every move. He moved with purpose in dance as we all passed by and smiled as he shared his personal joy.

We knew him well by sight but really did not know him. We do however know that over the cold days of winter, we lost a part of the ComFest experience when we heard of his passing.

Roger Barriteau, another lover of dancing at ComFest recalled:  “Babachu and I would approach each other at ComFest and mirror each other in flexing through dance poses as we exchanged greetings. He had been homeless for a long period and finally one year at our greeting I asked him how he was doing and his wonderful response was: “The city has set me up in an apartment – it’s very nice.” Barriteau also wanted us to remember that Babachu was an Indigenous American.

Dispatch reporter Holly Zachariah marked Babachu's passing through the thoughts and words expressed at his memorial service. With the permission of the Dispatch we bring these words to our ComFest community as a way to get to know Richard 'Babachu' Spriggs better: 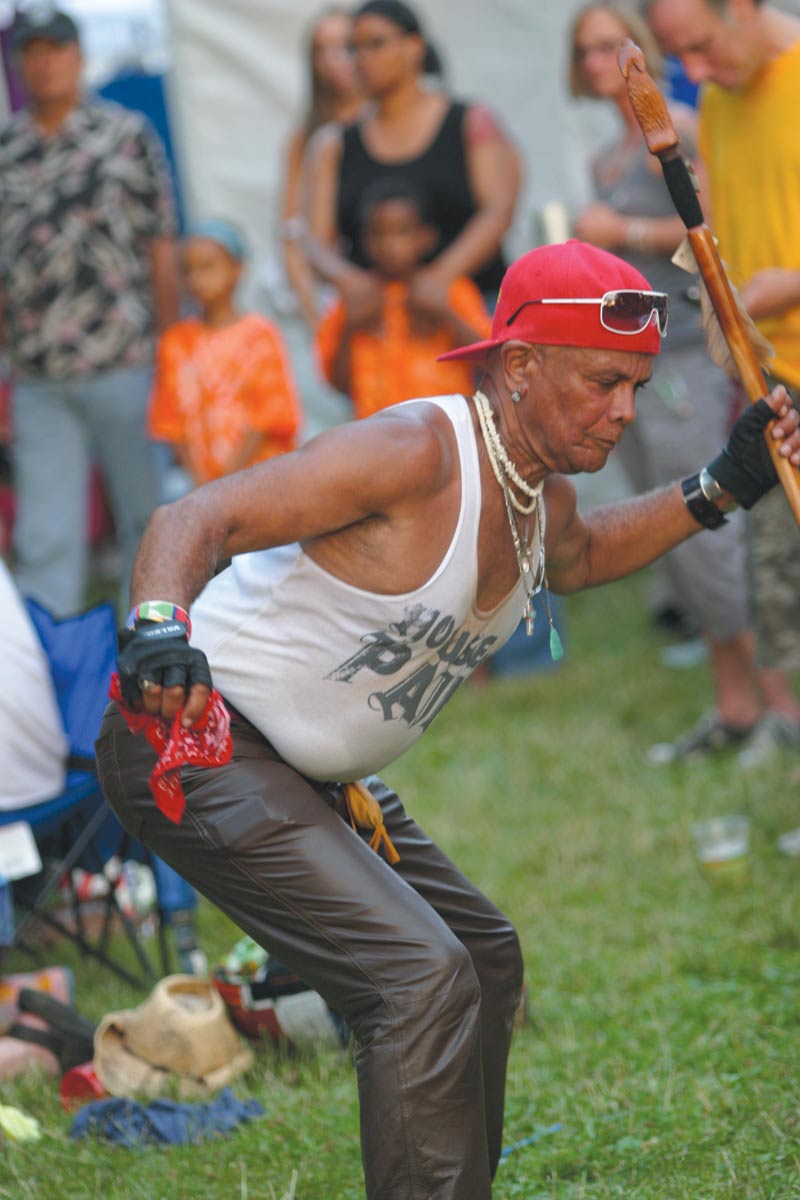 Babachu Spriggs: Near East Side Church gathering mourns ComFest dancer with storied past

Bishop Jerry L. Pierce Sr. stood at the pulpit and thundered away as he asked how a society could allow someone like Robert 'Babachu’ Spriggs — an artist, a spiritual man, a fixture known for his dancing at so many Columbus festivals, a friend to everyone — to leave this world in such a sad and unnecessary way.

How, Pierce demanded, does that happen?

And the couple of dozen people gathered Thursday night in the sanctuary of Miracle Cathedral on the Near East Side to say goodbye to their friend all just shook their heads and prayed for answers.

They were there to remember Spriggs, a man who for decades brought joy to so many in Columbus, whether he was singing during worship inside local churches, engaging in fellowship with others at a free community meal, or stealing the limelight every summer at ComFest in the Short North.

“As much as he danced, as much as he smiled, nine out of 10 people didn’t know he was homeless,” said Pierce, who is known for his decades of fierce advocacy for and passionate ministry to the unhoused population of the city. “Babachu danced as if nobody knew he was there dancing. Oh, if we all lived like that.”

And to that, the people all said together “Amen.”

Much is still not known about the details of Spriggs' life and his death. Some said he died in late February, though they didn't know how. But Pierce and others said at the service that Spriggs froze to death on the steps of a Downtown church, and Pierce thought it was in the first week of February.

The Franklin County coroner's office had a record of a Spriggs with a different first name who died on Jan. 30, so the two could not immediately be matched. And public records show Spriggs was 81. Those who knew and loved him say he was 80.

No matter. Everyone who gathered for the nearly 90-minute service at Pierce’s church Thursday was there simply to celebrate a life well lived — by the man’s own terms, they all agreed.

Every year, whether in the pouring rain or under a blazing June sun, somewhere out there in the middle of the mass of bodies at the free-wheeling, free-spirited party that is ComFest at Goodale Park, Spriggs could always be found putting on a show.

Turquoise rings on his fingers, silver chains dangling around his neck, often shirtless, always with a smile, this man who was a professionally trained dancer and choreographer who grew up in upstate New York, who built a career in Louisville, and who had traveled all over, somehow decades ago melded into the Columbus homeless community and sang and danced his way into the hearts of everyone he met.

Pastor Robert “Rusty” Russell of 2nd Chance Church on the Northeast Side told the small group assembled that he had only known Spriggs about four years but that was long enough to leave a mark.

He said he was amazed at how often he would run into Spriggs. And whether the man was at a breakfast ministry or dancing for a crowd at Easton Town Center, he was always the same.

Characters at ComFest: Babachu was among them

“He was the exact same person every time. It wasn’t a show,” Russell said. “He knew there were two reasons to be happy — either because of something or in spite of it. You never knew if he was having a good or bad day because he was always smiling.”

Churches across the city, from Downtown to the South Side, knew and loved Babachu

Marla Tomastik Clark is director of administration and finance at St. John’s United Church of Christ on East Mound Street Downtown, a place where Spriggs spent a lot of time.

“Babachu was absolutely full of grace,” Tomastik Clark said. “He was in need but you never knew that. He was just always so super giving. He was so loving and kind and we were just always so tickled when he showed up.”Pre-pandemic, Spriggs was a regular at the church’s casual Wednesday service and for the weekly meal at “The Largest Table,” where at least 150 from the local unhoused population would fellowship and break bread.

Spriggs generally sang the opening prayer, as he often did wherever he went.

Pierce said he first met Spriggs nearly 25 years ago when Pierce worked at the Open Shelter Downtown and Spriggs was a resident. Pierce remembers cleaning time at the shelter, when he would crank up music and "Babachu would grab a mop and just dance with it" to clean the floor.

He said at Thursday’s service that Spriggs — who everyone agrees was a quiet and private man who entertained but didn’t talk about himself much — has probably seven siblings who live all across the country. Pierce has been in contact with them in recent weeks as they searched for answers about the brother with whom they'd fallen out of touch.

Pierce said Thursday night that Spriggs had an apartment in a double-unit on Livingston Avenue for probably a decade, and that every time he visited him there it was always immaculate, the walls covered by Spriggs’ own paintings. But somehow, sometime, he ended up back on the streets where he probably was just as happy ministering to those he met and making them smile.

“Babachu was the Fred Astaire of Goodale Park. Whenever he danced, he was electric. He was a light to this city,” Pierce said. “But we cannot celebrate his life unless we talk about his death. There are people in this city we don’t know about who died because they were homeless, because they didn’t have a key to get into some heat. What about the other homeless Babachus? What about them?”

And to that, the people all said together “Amen.”