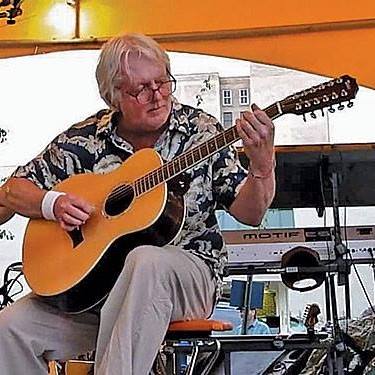 Jack was a very unique and amazing under appreciated Columbus musician. He was well known to many national artists and performed with some of them (Jackson Browne, David Crosby, Gram Parsons). He had a local jazz band in the 70's called Woody Haze. He was known to have taught David Crosby a lick that he used on one of his famous songs.

The last year has seemed to be intent on making us more aware of mortality, in both the big and little worlds. Amongst the more than sufficient reminders that were too close for me, one of the ones weighing most heavily on my mind and heart was the sudden and unexpected passing of one of my earliest musical associates, Jack Wilce. While not always in the public eye, he was a true Columbus legend, involved in and connected with so many unusual and noteworthy happenings one could, and probably should, go on at much further length than time and space allow.

You may think you recognize the name for another reason entirely, as there is a street named for his namesake ancestor, the first football coach in the then new OSU Stadium. Jack was somewhat of a sports star as well, having lettered in track in high school, but that is not why we are here today; this is all about the guitar. Well, and the banjo. When I met him I was new in high school and he had graduated, but we had mutual friends between us in age. As well as being a rock star guitarist, he also was quite the bluegrass banjo player. He agreed to tune down his 5th string and play banjo rhythm in my group the No Exit Jug Band, I suppose out of pure camaraderie. It certainly wasn’t adding to his fame and wealth. Yet, in some odd way, it led directly to his (and then my) Hollywood adventures. We were doing a concert at OSU, and at the last minute he decided to skip studying for a Philosophy exam and come join us after all. A woman named Penny Nichols, who had recently been on the cover of Life magazine touted as the next Joan Baez, was in Columbus playing some terrible lounge, and came to our concert being thrilled to hear there was some folk music activity. She hung out backstage jamming with Jack through the break and the second act and ended up inviting him to come to L.A. to be her accompanist.

While some may not have heard of Penny, most have heard of a couple of the other people he got involved with once he got out there. One was this guy who used to be in Jack’s favorite band, The Byrds. That David Crosby fellow. When I was out there crashing in Jack’s Hollywood apartment, he would go off to David’s place in the afternoon and jam, and come back telling us about the wonderful herbs he had. (None of which we brought back to us, dagnabbit.) Amongst the more striking features of Jack’s guitar experimenting were a number of original tunings. One of these which he taught to David, and the riffs Jack and David jammed together, developed into the song known as Guinevere. Aside from that, Jack had become part of a group being put together around an unknown songwriter named Jackson Browne. After the Elektra recording ranch up north (where that group was to be the house band) fell apart, a core of Jack, Jackson and Ned Doheny performed as a folk trio for awhile. Somewhere in the course of this association with Elektra there was a Jack Wilce single produced. A rather atypical effort for Jack, this was a couple of country songs. The backing group was the Flying Burrito Brothers. That record is somewhat of a collectors item due to harmony by Gram Parsons.

Back in Columbus, Jack continued his sui generous stylings. He always favored odd tunings, time-signatures and devices. Amongst the latter with which he was an early experimenter were that tube thing with which you fed the guitar sound into your mouth to shape it with vowels, loopers, and the midi guitar for which he was something of a traveling demonstrator and spokesman. However, it was a couple of rather simple tunes which payed the bills for awhile: the famous Dominos Pizza jingles. “Fast, Friendly, free Delivery!” “Dominos Pizza Delivers!” Who could ever forget.

Being a whole school of guitar stylings unto himself, he was a key inspiration and influencer for a number of people in Columbus. Bands that formed around him and played here and there were known first as Oink Johnson, based on a joke going around at a farm where I was living by then, and later Woody Haze, which I think was a pure Jack coining of phrase.

A couple of times his work was captured in the OSU TV studios, and one of his cousins managed to preserve these and make them available on YouTube. The earlier show also featured his brilliant but increasingly troubled cousin Chris Pearcy (aka Cisco), another friend lost a few years back: https://youtu.be/fP6dMHU5rps

Then, later, trying out the new color cameras with some of the Woody Haze guys: https://youtu.be/o5M7rXWomtc

There are more videos from these sessions to which these should lead you. Also, apparently there is also video of when his old compatriot Jackson Browne called him up to the stage at a concert a few years back.

Well, I hadn’t seen much of him in recent years, I didn’t go out much even before the pandemic, but thankfully we did have a couple reunions. During one discussion he mentioned wanting to get out and play some, which led to me setting up a dinner show at the Rambling House which we split. Someone there talked about having us come do something somewhere else, but that never happened. But, he did start playing out here and there. Our last conversations on FaceBook involved our mutual nostalgia for the Kingston Trio, my finding a DJ Promo copy of his 45 on eBay (“It wasn’t released, it escaped,” he remarked), and him making jokes about receiving his Stimulus Money. Then suddenly, the bad news. Maybe he was over-stimulated. Again.