It seems Sean Carney had little choice other than to become a musician. His father, Larry Carney, was a bass player and educator who was Strings Director at Dublin Public Schools. “He was beloved by all of his students,” said Carney by email recently. “I run into musicians who were students of my father’s and they really love him. He was the beginning of music for me, teaching me to play electric bass - dealing with my love of heavy metal and steering me towards jazz and and towards appreciation of Classical music.”

His uncle Dave West, a Columbus Blues Alliance Lifetime Achievement Award winner, taught him about the blues. “Uncle Dave led me towards the real blues of people like Otis Rush, Bee Houston, Robert Lockwood, Jr., Howlin’ Wolf - I loved it right away and my listening tastes changed drastically overnight,” he said.

Drummer and bandleader Dave invited him into the Joint Rockers, a band led by another uncle—Dan—when he was 16. And if a little interest toward the jazz direction was needed, well, there was uncle Gary Carney, a trombonist and arranger who taught at OSU and was married to Michele Horsefield, a key voice coach and jazz performer in town and an instructor at Capital University.

ComFest organizer Darryl Mendelson, who nominated Carney said his music is, “on the cusp of Blues and Jazz,” and suggested, “You could have called it Jump Blues or Swing Jazz. It both jumped and swung.”

Fellow ComFest/Hot Times organizer Candy Watkins has known Carney for decades and remembered him playing early-on with uncle Gary Carney in the Listen For The Jazz All-stars. “I have traveled many miles with Sean,” she said, “been with him at jams with Lucky Peterson, Gene Walker, Branson Welch and so many others. Sean’s amazing talent makes him a popular international artist as attested to by his repeated European tours.” 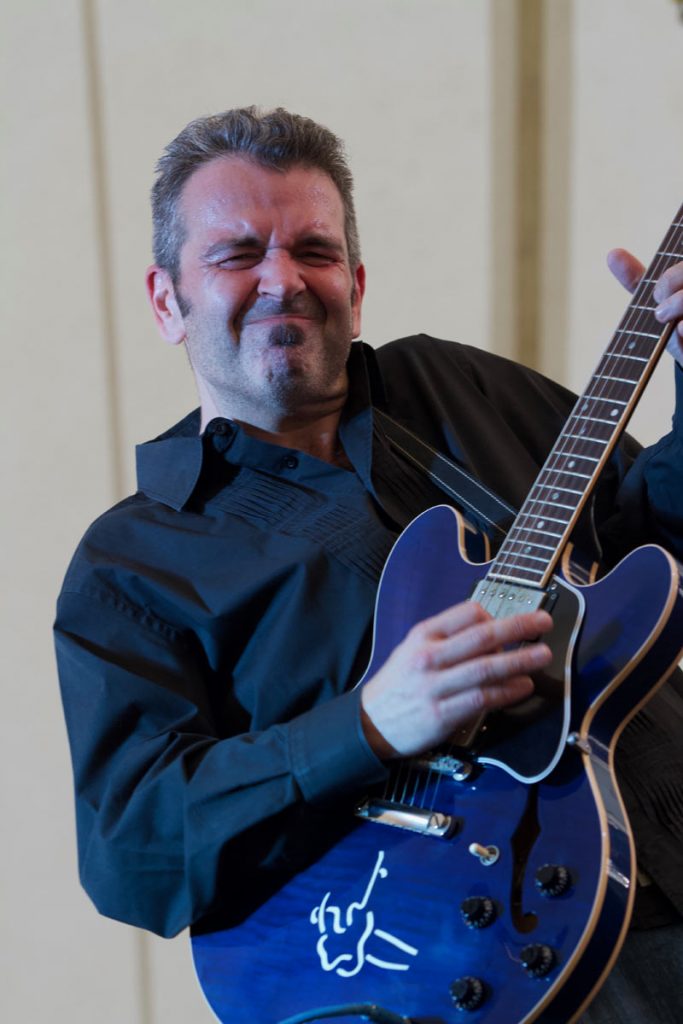 Back home, audiences at both ComFest and Hot Times have responded joyfully to Carney’s performances.

The pros have noticed, as well. Carney took first place at the 2007 International Blues Challenge in Memphis, Tenn. He has worked with the likes of Hubert Sumlin, Duke Robillard, Hank Marr, Gene Walker, and Hal Singer.

Though he admitted to being influenced by T-Bone Walker, Carney said he has learned especially from the musicians with whom he has played. “Christine Kittrell and Jimmy “T-99” Nelson were legends and they were MY teachers,” he remembered. “Those two really made an incredibly significant contribution to my musical development and they were my dear, dear friends… Duke Robillard has been a major influence and has led me to a ton of great music.  He’s a musician and an archivist, which is right up my alley.”

One of his favorite performances at ComFest was the first one, with singer Willie Pooch fronting the band. For decades, the late singer led something like a finishing school for Columbus musicians.

“I believe (my first ComFest) was 1998, I had just released my first CD, ‘Provisions’ from Sean Carney & The Nite Owlz and had done a couple of shows for Don Pavelcik at Larry’s,” recalled Carney.  “Don liked our sound and was the one who first invited me to perform at Comfest.  I had a great lineup with my uncle Dave West on drums, Keith Koby on upright bass, John Popovich on piano, Mark Baruth, Raymond Powell and Edwin Bayard on saxophones along with the great Willie Pooch on vocals!”

Carney has another side, as well, that of a caring member of the community.

“He served three terms as president of the Columbus Blues Alliance,” according to Mendelson. “He programs and hosts Sean Carney’s Inside Blues Sundays from 6-9PM on WCBE and His Blues For A Cure shows and CDs have raised thousands of dollars for cancer research and patient support.”

Watkins put it simply: “Sean’s work with Blues for a Cure is legendary and his generosity is boundless.”