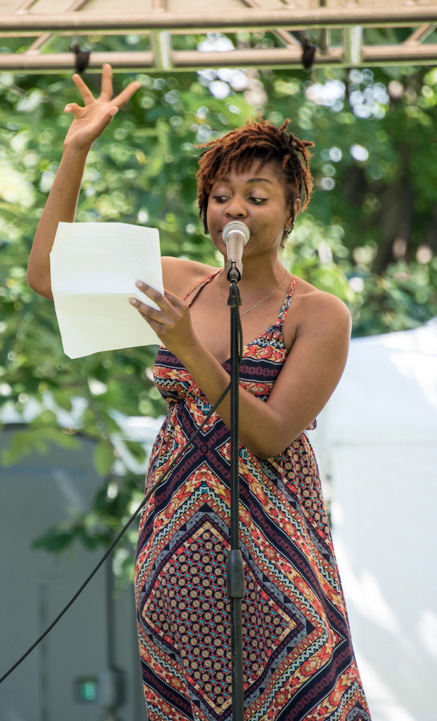 “I am a poet. I write for healing. Poetry is prayer, is life, is a form of communication for me. Sometimes, I have a story I want to tell and I look for a metaphor to help me tell the story. Sometimes, I see images and I use those images as a metaphor and build the story from that place.” -Barbara Fant

Barbara Fant is immediately recognizable in Columbus. That she is recognized and celebrated as a poet says a great deal about her talent and contributions. It also says a lot about the community’s willingness to embrace the spoken word as an indispensable art form and appreciate a great talent in its midst.

Fant has enriched Columbus with her work. And she has enriched ComFest with meaningful and inspired workshops, bringing language to life in Goodale Park and reminding us of the power of reflection, hope and faith.

ComFest is pleased to recognize Barbara Fant as 2021 Honored Artist for her gifts of language, bringing the power of language, healing and comfort to individuals and the community at large.

Fant always loved writing but it became particularly important when she lost her mother when she was fifteen years old and she became an “angry teenager.” Creating poetry became her way of processing, and her way to pray.

She grew up in Youngstown and came to Columbus to attend college. She earned a Bachelor of Arts in English Literature and Language Arts in 2010 and a Master of Theological Studies in 2012.

One day she found herself standing before an open mic and hasn’t left the stage since.

She has been on three National Poetry slam teams from Columbus and has represented the city in four national and world poetry slam competitions. Her first poetry collection, Paint, Inside Out was released in April 2010 from Penmanship Books of New York City when she was awarded The Cora Craig Award for Young Women Authors.

She also was a featured artist in the Columbus Makes Art Campaign and Columbus Alive featured her as one of their People to Watch in 2017.

In July of 2020, during the height of the COVID-19 pandemic and the Black Lives Matter police violence protests, Fant was featured in “Healing Through Poetry,” an author talk hosted by the Columbus Metropolitan Library.

Fant formerly served at Huckleberry House and of Art for a Child’s Safe America, working in shelters, prisons, correctional juvenile facilities, and elementary schools teaching art as a form of healing. She is also a member of ArtFluential of REACH communications, Is Said and the Advance Party, Transit Arts, and has also been a regular performer on the radio show Street Soldiers.

Commissioned by The Columbus Foundation, her poem “Today, Beginning Again,” written for Columbus’s Bicentennial year can be found inRevealed: Columbus, The Story of Us.

Barbara works at The Columbus Foundation as the Nonprofit Outreach Administrator. She also serves as an editor for the Antioch University Los Angeles literary journal, Lunch Ticket.

ComFest is pleased to recognize Barbara for her many contributions to the community and to Community Festival.